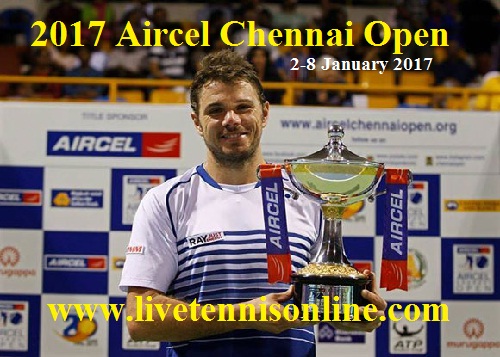 The Aircel Chennai Open 2017 is an India largest tennis event and it is a part of ATP World Tour tennis. It is 22nd edition tennis tournament and will be played at the outdoor hard courts and It is owned by IMG and sponsored by IMG Reliance. This Aircel Chennai Open officially held in Delhi as the McDowell Open, and in 1997 it was moved to the SDAT Tennis Stadium in Chennai. This tennis tournament has captivated few of biggest tennis players, including Carlos Moya, Boris Becker and Rafael Nadal. The Aircel Chennai Open 2017 is consists of two main events Men's Singles and the Men's Doubles and the total prize of this event is $450,000, it will be takes place from 2nd January to 8th January 2017 at the SDAT Tennis Stadium in Chennai, India.


In Men’s Singles category 28 tennis players are included, in which three wild cards and four qualifiers, and in Men’s Doubles characterized for 16 players. It is the first ATP event on the tennis calendar and it is held in the first week of January. So don’t miss to watch 2017 Aircel Chennai Open tennis live coverage on your PC, laptop or any smart devices worldwide. Simply visit our website and subscribe to your membership, our registration fee is most reasonable and convenient for all users. All you need just good and high speed internet connection, no need to install any software or hardware, just open our site on the browser and enjoy our live streaming service in high quality around the globe.